To create Loving Vincent, we had to hand paint 65,000 frames of oil paintings. To make this process as efficient as possible, we spent 2 years during the development of the project working on our Painting Animation Work Stations (PAWS). Each of our Painting Animators, across 97 workstations in 3 studios in 2 countries, painted inside a PAWS.

When we originally had the idea for the film, the problem we faced was how we were going to be able to make it in a reasonable time frame. Our first simple painter setup was very home made: an easel; a camera; a tripod; ikea shelving unit; lamps; projector; computer; and a memory stick. Often we were losing time because the painter was knocking one of the main elements, and everything would have to be put back into alignment. Also people were walking around with memory sticks, and we had to go to the workstation to review the frames. This is fine when we had a handful of painting animators in one location, but wasn’t going to work when we had 97 across 3 locations.

So we started thinking about a workstation for our painters which would allow them to focus just on the painting, and allow us to view what they were doing without interrupting their flow. The new PAWS aimed to minimize time wasted on unnecessary actions, like turning the lamps on and off. 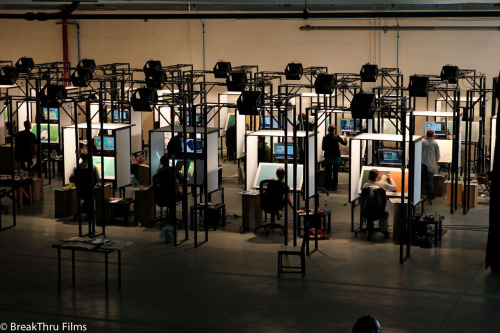 PAWS during our painter training period

Painter training lasted six weeks, and we used these PAWS units above. For the final film however, we needed to maintain constant light conditions, a crucial consideration for any animated film. We knew that the PAWS would need some sort of curtains, but they were too flammable to use as walls so we built plaster walled booths for the final PAWS design.

This provided a stable environment where everything is rigidly set in proportion - the canvas to the camera, the canvas to the projector, and the PAWS had its own native light source.  This minimised the amount of things that could go wrong for our Painting Animators during a shot, and allowed them to focus as much attention as possible on painting and animating without being concerned about lighting and technology.

This new PAWS system, alongside the painters growing experience from training, enabled the average painting time to come down to 40 minutes per frame. The main light source came from a lamp placed right above the canvas, oriented downwards. We placed a diffusion filter on the upper part of the PAWS, to ensure the light was as even as possible and we used white blends on both sides of the canvas because the top lamp didn’t give enough light on the sides of the painted frames. As the lower part of the canvas was darker, we also added a second lamp, directed upwards toward the ceiling to reflect light.

Our Painting Animators used the reference footage which could either be projected onto the canvas area, or be viewed on an HD monitor above the canvas. Once each frame of painting was finished two photographs were taken with a Canon digital stills camera at 6k resolution. 24 of these high-resolution photographs of 12 frames of painting make up each second of the film.

Each shot (which varied in length) was painted on a separate canvas. The first frame was a full painting, then each subsequent frame was re-painted, matching the brushstrokes, colour and impasto of their previous frame, for all parts of the shot that are moving. At the end of each shot we are left with a painting of the last frame, which you can find examples of here.