The Van Gogh Museum has collaborated with the Loving Vincent team since the early stages of the film’s research and development back in 2014. We interviewed experts at the museum to discuss Vincent van Gogh’s painting techniques and visited the gallery regularly to examine the paintings up close as we began the painting animation process. In 2016 we screened the first 20 minutes of the film at the museum, discussing the project with an enrapt audience afterwards.

“The Van Gogh Museum’s mission is to make the life and work of Vincent van Gogh and the art of his time accessible to as many people as possible in order to enrich and inspire them. We applaud innovative approaches to reaching Vincent’s fans all over the world, and are therefore very happy with Dorota Kobiela and Hugh Welchman’s cinematic masterpiece Loving Vincent, the first ever fully painted feature film.”

The museum team joined us at the World Premiere of the film at Annecy in June 2017, and collaborated on a special event where Axel Rüger, the Director of the Van Gogh Museum, interviewed Loving Vincent’s directors, actors and painters for a Facebook Live Q&A.

19 of the 120+ paintings which we reimagined for Loving Vincent can be seen on display at the Van Gogh Museum in Amsterdam, from Vincent’s most recognisable images like Wheat fields with Crows, Bedroom in Arles and The Sower with the Setting Sun to lesser known paintings like Undergrowth with Ivy and Sloping Path in Montmartre. 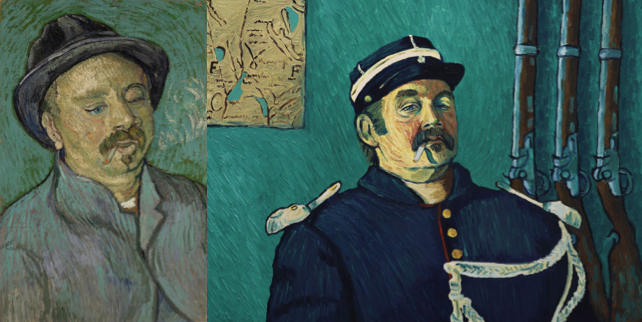 Vincent’s The Zouave and his character in Loving Vincent.

Smoke pours from View of Paris.

Visit the Van Gogh Museum website to find out more about their extensive collection of Vincent van Gogh drawings, paintings and letters.